Here's a SAMPLE lab of this format: 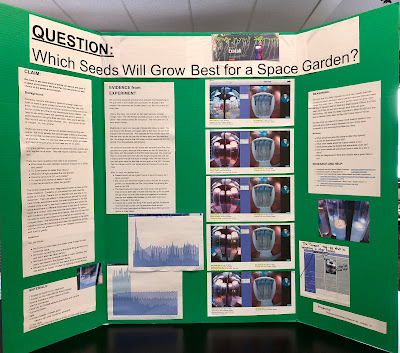 QUESTION:  Which Seeds May Grow Best
for a Space Garden?

CLAIM:   (In this section, you claim what you know, what you think will happen, and what you intend to test.)

We need to see what kinds of plants can sprout and grow in a space
environment. We think Pac Choi would be our best choice of the seeds in
the Exolab. We think they won't grow straight stems because of micro-
gravity.

Someday, humans will travel to space far enough away from Earth to need to grow at least
some of the food they take with them.  We are practicing for living in space by sending
humans to live for months at a time on the International Space Station. We need to see
which plants will germinate and grow in space so space explorers can grow their own food.
Also, plants will help filter out and use up Carbon Dioxide - CO2  - and convert it back to
Oxygen - O2 - for humans.

NASA and some other groups are already experimenting with plants.  We know already that
several types of lettuce grow pretty well on the ISS, but that some plants would not work or
would not be practical.  Trees, for example, take too much space and water and take too long
to grow, so fruit trees are not an option. For space gardens, good options are plants that grow
quickly and don’t require much room.  They will require nutrients, water, and light.

There are many questions that need to be answered:

The Exolab experiment from Magnitude.IO seeks to help answer these questions.  Exolab
is a Cube experiment and uses the space of 2 Cubes. There is one on the ISS now, and one
in our classroom.  There are others in other schools around the world. Each Exolab
experiment sends one plant experiment to the ISS several times a year to see how it does in
space, and sends the same experiment to different classrooms to see how it works on Earth
as a control.  Both sets have the same plants, the same light conditions, and the same time
frames. Both the ISS set and the sets on Earth are hooked to the Internet so everyone can
compare them. The difference is one set is exposed to the same radiation as the ISS
astronauts and does not experience gravity, and the other set grows on Earth in our radiation
amounts and with Earth’s gravity.

1 Exolab on Earth in our classroom
1 Exolab on the International Space Station
Various Exolabs at other places on Earth
Internet connection
Electricity for Exolab sensors and lights and camera
4 growing tubes
Agar
4 kinds of seeds, 2 seeds each: wasabi, pac choi, purslane, amaranth
4 tube caps
Biotape to seal the caps (lets air in but not microbes or dust)

EVIDENCE from EXPERIMENT:
(Here, you show evidence that you did an experiment, and show what happened and what
you found out.)

We used pre-prepared growing tubes shipped from Magnitude.IO.  We put them in our
Exolab and connected the Exolab to the internet. We observed the Exolab tubes in our lab
and on the ISS every day.

After a few days, we noticed we had seed sprouts, but also orange mold.  The ISS Exolab
showed sprouts in only 3 of their 4 tubes - their wasabi seeds did not sprout.  The ISS tubes
did not have mold, though.

Magnitude.IO sent us a new set of tubes after about a week.  We put those in the Exolab, and
again, after a few days, we had both orange mold and sprouts.  We replaced the first wasabi
tube with the new one, as the old one did not have mold and the new one did.  No orange
mold in the ISS tubes, but the wasabi still did not sprout. The ISS purslane quit growing.

We observed that both the ISS tubes with amaranth and Pac Choi sprouted and grew,
although the purslane on the ISS died after a few days, and the wasabi on the ISS never
sprouted. We observed that our amaranth and Pac Choi are tough because they are still
trying to grow through the layer of orange mold. We saw that our two that grew were the two
that did not grow on the ISS.  We saw that the orange mold in our tubes grew and spread in
just a few days.

(Put your data table here - or a sketch or two, photos, a chart, notes, etc.  You should have at least one kind of displayed result.)

REASONING:
(Here is where you explain what you are THINKING about what you observed or what you found out.  WHY do you think this happened?  What is your EVIDENCE that supports this thinking?)

We think that it is really important to have very careful scientific procedures when planting a
space garden because there are many things that could ruin it.  If the space garden does not
grow, then the space travelers will not have any fresh source of food, and they might die if
they do not have enough food they can grow themselves.  We think it is really important to
keep the ISS and any space habitats really clean so they don’t have mold in the air.

We also think we need to try many more kinds of seeds to see what will grow well in space
because we don’t know what amaranth is, and not everybody likes pac choi.

After 21 days, we decided that:

Our claim was correct. (Or, incorrect. Or, partly correct.) I also learned that (finish the sentence).

We Wonder: (What would you like to find out next? What questions did your project make you wonder about?)

Lab Notebook - In front of your project, or attached to it, you should have your lab notes.
These can be in a notebook or binder, or simply stapled together. This has your rough copies,
your brainstorms, your ideas that you didn't use, etc. You can also add some of your research
if it seems helpful to having people understand what you did.

Mrs. Scheibner
Mrs. Scheibner grew up in Kelseyville, California, and has lived in Truckee since 2000. She loves all things science, and is a big fan of NASA and space. W