Below is a suggested format for a Traditional Style Science Fair experiment.  A complete project should have the following components:
Here's a SAMPLE lab of this format: 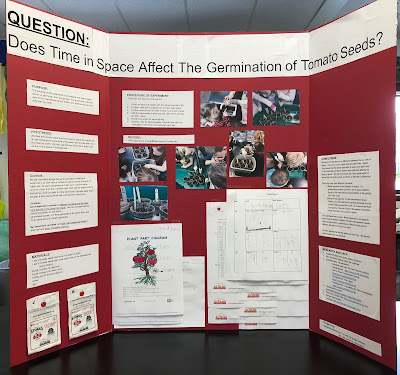 QUESTION:  Does Time in Space Affect The
Germination of Tomato Seeds?


PURPOSE:
The purpose of this experiment is to compare how many seeds sprout, or germinate, from two
groups. The groups are a set that went to the International Space Station and another set that
have only been on Earth.

HYPOTHESIS:
We think that tomato seeds that have been in space for a while will not
germinate at the same time or the same rate as ones that have only been on
Earth.  We don’t get to know which set is which until we turn in our data to
Tomatosphere.

Controls
We are controlling things that we do not want to affect the experiment, so both
sets of containers get the same amounts of water, dirt, the same temperature in
the room, and the same amount of light from the overhead light. Both get the
same kinds of everything.  Each pot gets 5 of the same kind of tomato seed.
Each pot gets a stick saying which set of seeds they came from.

Variables
Our independent variable is whether the seeds are the ones from the ISS or
the ones from Earth.  We can compare the two sets of containers to see which
germinates sooner, or if they germinate at the same time, and if the same
amount of each germinate.

Our dependent variables  are how many seeds germinate in each set and
when the seeds come up.

PROCEDURE OF EXPERIMENT:
These are the steps for what we did:


RECORD:
This is our record of what we discovered and measured.

CONCLUSION
We found out that there is a difference between the two sets of seeds.  There
are more K seeds that sprouted than J seeds. That means that the seeds that
went to space and spent time on the International Space Station were definitely
affected by being in space.  We just don’t know yet if they grew better or worse
than the Earth seeds, but there is definitely a difference.

Two things may have affected the seeds:


Our hypothesis was correct.  Being exposed to micro-gravity and the extra
radiation outside of Earth’s atmosphere caused those tomato seeds to
germinate at different times and in different amounts from those on Earth.

(Here you want to list your research sources, who helped you, etc.)

Mrs. Scheibner
Mrs. Scheibner grew up in Kelseyville, California, and has lived in Truckee since 2000. She loves all things science, and is a big fan of NASA and space. W